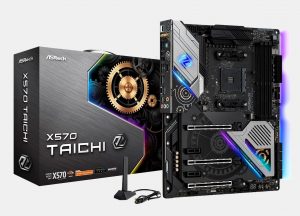 Here we are with the ASRock X570 Taichi, just over a full month after the launch of AMD’s 3rd generation Ryzen CPUs and the matching X570 chipset. Truth be told, it definitely feels like it’s been much longer than a month. As we’ve come to expect with AMD platform launches, plenty of updates coming in fast. Each successive update bringing stability and compatibility improvements. This latest entry in the ASRock X570 Taichi is easily my favorite X570 motherboard thus far. As such, we decided this would be a great candidate for an OC review.

What that translates into is that the review is light on the more mundane and heavier on the the fun bits, which is tuning and performance. So, without further delay let’s dive into the ASRock X570 Taichi OC review.

These high end X570 motherboards are generally similar to each other, that is you receive USB 3.2 support, PCI-Express 4.0 support, Wi-Fi 6, Bluetooth 5.0 and Gigabit Ethernet. All boards worth their mustard have all these features. The ASRock X570 Taichi is no exception to this, but adds little features here and there that make it uniquely ASRock.