For testing I’ve used the Ryzen 7 3800X at roughly 100MHz lower than the CPU’s max stable clock. The reason for this is that the AMD Prism cooler is simply not able to keep temperatures under control at 1.4v. As such the system would crash. 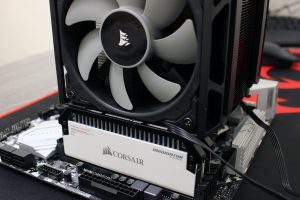 Also, worth noting as that, the reason there are no results for the Prime’95 overclocked runs on the next page for AMD is precisely because the system wold shut down due to thermal load.

Testing was done on an open air benchtable  so depending on the air flow i your case and a host of other conditions you may get high or lower temperatures. These figures on the next page a comparison between these two coolers in identical but also specific conditions. Room temperature was 26’C throughout testing. Thermal grease was allowed to settle for three hours before measurements were recorded.

You are here: Page 3 – Test System