Unboxing and assembly video of the CORSAIR A500 on the ASRock B450M Steel Legend motherboard.

The last CPU cooler we reviewed was a budget AIO unit, and that unit proved that air coolers would need to improve to remain relevant in a world that’s fast forgetting that tower coolers are better than they have ever been. At the going price, the A500 represents the more premium air-cooling products money can buy, and of course you get the performance to match. With this cooler you can genuinely use it to cool HEDT CPUs and highly overclocked gaming builds. 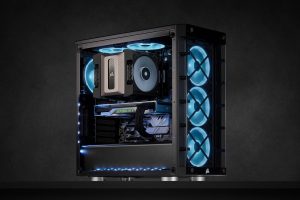 One of the best things about the A500, that may not have come across in the video as vividly is just how easy it is to install. True to Corsair’s tradition of making coolers that are an absolute pleasure to install, the A500 continues in this tradition. Especially when mounting the unit on AM4 or LGA 2066 sockets, you keep the existing mounting mechanism and complement it with a few standoffs and screws. Full marks as always for Corsair here. 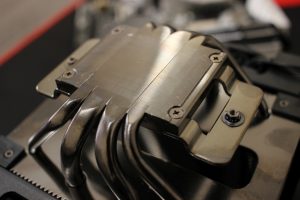 To be noted is that on the unit I tested. The heatpipes which are to make direct contact with the HIS were not perfectly aligned. Between the 3rd and 4th heatpipe, there was a gap and they were not flush against each other. It’s nothing thermal paste doesn’t deal with, but it is worth mentioning as it may be present on other units. The included XTM50 thermal paste deals with this easily. 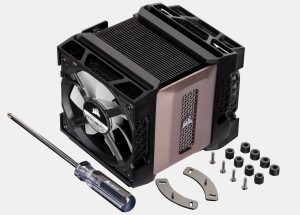 Build quality is not something that we tend to speak about with cooling units, however Corsair has done a commendable job with the A500, at least in presentation. I like the packaged Phillips screw driver, instead of the long metal generic thing (Noctua) used by others. It’s a small difference, but one I do appreciate. Add the extra tube of XTM50 in there and you have a decked out cooler.

You are here: Page 2 – General Overview