Copying a single large 8GB file from an internal NVMe SSD, we only see write speeds up to 584MB/s and returning the file back, speeds were much faster (Windows reported 2GB/s), but the file copied in about one second. Now copying a 11GB folder with smaller 400mb files, representative of video media, the write speeds dipped slightly only topping out at 541MB/s. Throwing the folder back to the internal storage saw some ups and downs but coming to a stable 818MB/s and taking less than a minute to complete the transfer. 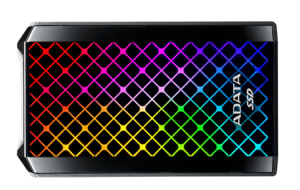 As mentioned earlier, the ADATA SE900G has RGB lighting on the top with a swanky diamond pattern. As for controlling the RGB, no dedicated RGB application is mentioned on the product page and it could not be controlled via any vendor app I already had installed on the PC, so you are stuck on some rainbow wave action for all eternity. Would have liked to see a way of disabling the lighting completely.

The included Type A and Type C cables are a bonus, not in the sense that they give you something necessary to operate the drive, but that they give you an option if you do not have a Type C port, like on the XBOX Series machines. These cables could have been a touch bit longer for convenience’s sake.