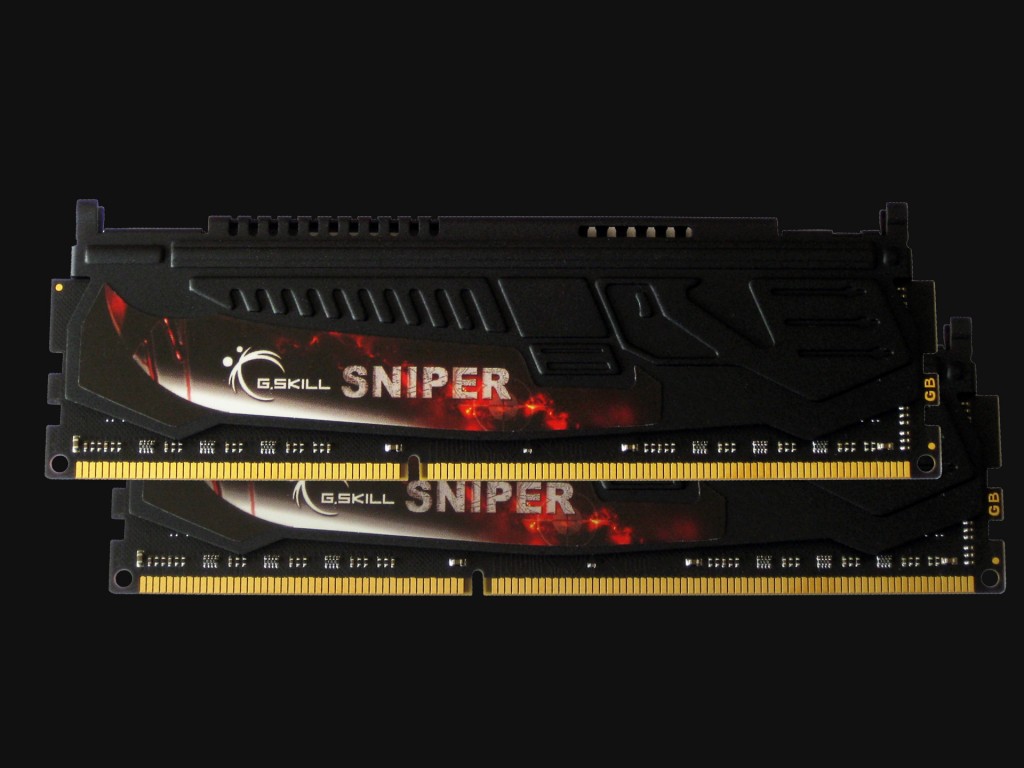 Do not let the hype around DDR4 fool you. We appreciate the new memory standard here and all it brings, but the truth is there’s plenty of life left in DDR3. In fact there is likely to be a continued interest in DDR3 for years to come, if only because the platforms are that much more mature and it is cost effective. As such, in todays’ landscape where PC gaming is on the rise again and hardware is easily eclipsing the gaming titles on the market. There’s sense in being a little more prudent in how we spend our hard earned cash and while we may all want that high speed DDR3 2800MHz set or above. It isn’t economically viable, thus it falls to sets such as these from G.Skill to provide the performance without breaking the bank.

Our good people at G.Skill sent us a budget Sniper F3 kit to look at and despite the very low price, it does offer great performance. Not only that but it’s overclocking potential is impressive given just how low the price is. For a mere $87 you’ll be able to not only get a decent looking kit of memory, but one that can overclock like the clappers. It may not get you the world records that are well sought after by competitive overclockers, but it will more than satisfy your gaming needs. Regardless of how it performed I was moved by the super low price and I knew going into this review that if G.Skill’s history is anything to go by, this would be a set that would prove to be worth far more than it’s selling price. This is how it fared on our test platform.

This is the standard affair here. The SPD and XMP profile are identical save for the operating voltage and frequency. Timings are as we would expect with Hynix chips. Please keep in mind that this set is single sided as well, thus the DIMMs are fairly thin and light, even with the heat spreaders on them.

As usual we test all components on a regular Windows 7 64-bit install. It is more representative of the normal user experience than a stripped down; highly efficient installation would be for competitive overclocking. 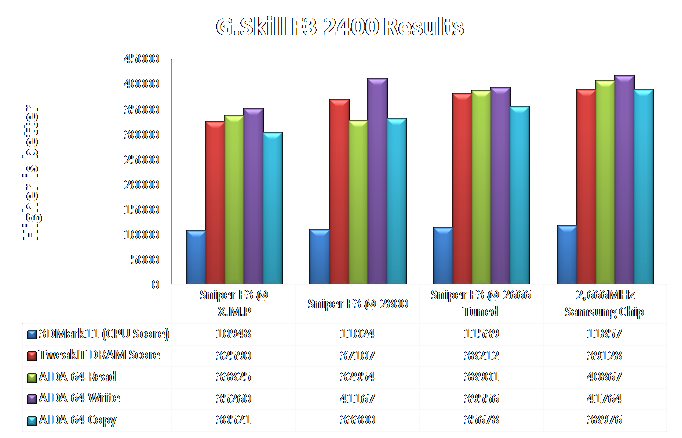 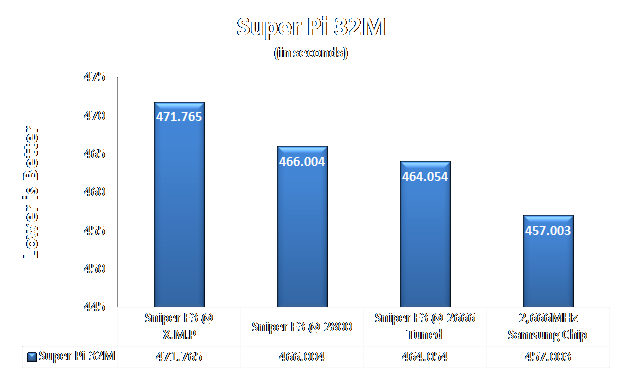 For my testing I only chose to do three settings. The default XMP 2400, an overclocked 2800MHz and a tuned 2666MHz setting which is obviously the sweet spot. It shouldn’t be too alarming that the memory can reach 2800MHz even though rated for 400MHz below that. We are after all dealing with MFR memory here which is known to reach incredible speeds, if at the cost of actual performance.
As a result of this well documented behavior I decided that something a little more useful was in order. There’s no doubt that with LN2 cooling on the memory or even dry ice, this set would go a lot further, but it’s rare that one would be overclocking a $90 and spend several times as much on LN2, a POT and just the time. Thus I looked at practical performance that any gamer (because this is who this set is built for) can achieve with some time put into secondary and tertiary timings tuning.
You’ll immediately see that the default XMP profile provides solid performance that’s very much in line with what you’ll get with any other similarly configured set from any vendor. There’s nothing to be seen here thus I swiftly moved along to the 2800MHz setting which surprisingly enough didn’t need that much tuning to achieve. In essence all I needed was to set the multiplier and increase the system agent voltage ever so slightly and the RAM booted up perfectly, passing Hyper Pi 32M and any other test I threw at it. Honestly, G.Skill could have sold the RAM as a 2800MHz kit and charged several times more, but the powers that be or at least their binning process concluded that this would be a 2400MHz kit instead. I for one am not complaining because, despite that each and every set of memory will behave differently, we can be assured that at the very y 2,600MHz is possible. This is not a promise G.Skill makes to you and the only guarantee is that it will operate at 2,400MHz but I would eat my hat if it turned out that there’s an F3 2400Mhz kit out there that can’t make 2,600MHz.
At this point I was thinking perhaps tightening the memory at 2,400MHz would yield great gains, alas this was not meant to be. I could not even get CL10 to POST. 11-12-12-36 would POST and go into windows but even Super Pi 1M would crash after several runs regardless of how much VDIMM I applied. In fact adding more made the situation worse, where Windows would show the dreaded BSOD while loading. As such I went back to just sorting frequency and tuning secondary and tertiary timings. As I tuned down each of the settings I found that the system became unstable and there was no real possible way to increase performance at 2,800MHz.
At 2,666MHz however, things got much better and even though the primary timings would still not budge, I was able to tighten right down to some very nice efficiency for such sticks as you can see in the results. 3DMark11’s CPU score has a massive reliance on memory efficiency and thus we showed the biggest gains there, going from a sub 11,000 score to 11,539. This obviously translates into a sizeable gain in the overall score of the benchmark, provided you were CPU/Physics bound in the first place.
Gaming performance, will not be impacted as much, if at all, but it wouldn’t hurt to tune it there either as you’ve essentially bought a 2,666MHz kit that’s marked as 2400MHz. So why not run it as fast as it possibly can, after all it’s free* performance.

All serious overclockers and power users may lament the end of high performance ICs on DRAM kits, but that doesn’t’ mean there isn’t any life left in the DDR3 kits we find this late into its lifespan. At this price G.Skill continues to deliver memory that has plenty of room for tweaking and is more than able to deliver the performance if you’re willing to put time into it. The Sniper 2400 is a wonderful value for money set.