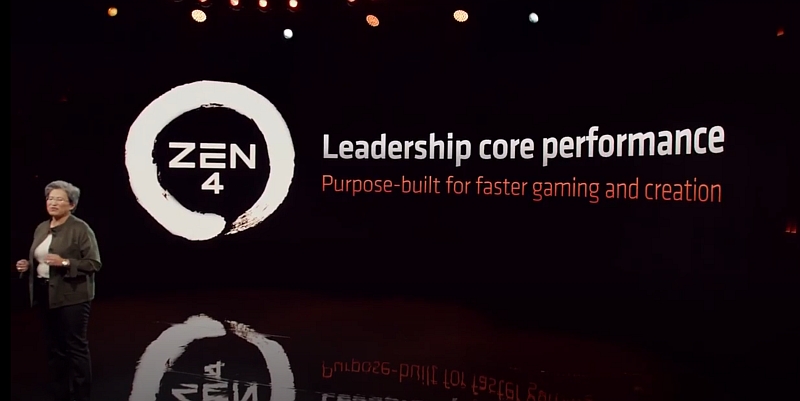 AMD is presently premiering their Ryzen 7000 series CPUs  Slides from the on AMD Ryzen 7000 Series are presently online, for the ongoing launch event. AMD is presenting what I consider an incredible leap in performance and overall platform value. Platform for platform, it is safe to say AMD is winning, at least in terms of connectivity. A more detailed and video on everything revealed will follow of course, but right now this is simply about what’s being presented before us.

The existence or the B650E chipset is another interesting revelation. It appears this chipset has abilities absent on the X670, but of course present on the X670E. Mainly the ability to operate a Gen 5.0 GPU in tandem with a Gen 5 M.2 drive. For the other chipset SKUs, it’s an either-or scenario.  I suspect all the major board vendors to have some sort of high-end SKU featuring this chipset, forgoing the vanilla X670 as it’s likely cheaper as well.

The main event as always are the CPUs themselves. Simply put AMD has achieved some incredible feats with this generation of CPUs. The leap in performance between the Ryzen 3000 series and Ryzen 5000 was not this significant if I recall. Not in IPC but overall performance and platform ecosystem (More chipsets to choose from with meaningful differences). I remember the Ryzen 5000 series launch and being thoroughly impressed by it. The 5000 series had a domineering lead against the previous generation and to a large degree the competition as well.

The leap in performance this time is equal if not greater, but INTEL does have significantly more competent CPUs.  Thus, the dominance shown at the Ryzen 5000 series launch is absent. There is however, the possibility of leaked RPL scores having served to undermine AMD’s performance gains with the Ryzen 7000 series.

Be that as it may, a 29% performance increase in any SKU is staggering and well worth calling a generational leap in performance. The clock speed increases, architectural changes, more advanced manufacturing and packaging process and a host of other changes seem to be more than delivering.

Again, these are numbers from AMD, but I think we are past the time of such numbers being widely different from the ones end users reproduce. If anything, I suspect performance will be even better than what is being presented right now.

In raw IPC figures AMD is claiming 13%, I assume the switch to DDR5, clock frequency increases and expanded TDP allowances make up the bulk of the remaining performance gains. Regardless, it is impressive to see AMD CPUs hitting clock frequencies as high as 5.7GHz. As usual, online leaks have revealed clocks as high as 5.85GHz. It remains to be seen how true that is, but I would not be surprised if this were possible out the box or with PBO/XFR tuning. Truly remarkable and speaks well to this generation’s technological milestones.

Price wise, it seems AMD has managed to hit a sweet spot. I doubt if these prices will be reflected on launch day, but at some point, they should settle around MSRP. At such prices I think AMD has an incredibly strong line up, $699 for the range topping (at least for now) 7950X is nothing short of brilliant given that the Ryzen 9 5950X carried a $799 MSRP when it launched. The rest of the range in the 7900X, 7700X and the 7600X retain identical MSRP prices of $549, $449 and $299 respectively.

Curious that what I expected to be the Ryzen 7 7800X is actually the 7700X instead. Perhaps there may be a special SKU similar to the 5800X3D.

Either way, this entire 7000 launch is nothing short of stunning and there’s heaps to uncover here in the next few weeks. INTEL better bring the pain with their imminent 13th Gen Core launch. As it looks performance along may not be enough to convince users. However, we shall see at that point.

Until then, gamer on. It hasn’t been this exciting in decades if ever.