GIGABYTE TECHNOLOGY Co. Ltd, a leading manufacturer of motherboards and graphics cards, announced the launch of the newest B550 AORUS motherboards primed to unleash the potential of 3rd Gen AMD Ryzen™ desktop processors. The all new B550 AORUS motherboards kick off the PCIe® 4.0 era with extensive feature sets, and equip up to Direct 16 phases of digital power design with advanced thermal solutions that provide the processors and chipset more stable power supplement. Select GIGABYTE B550 AORUS motherboards feature a native USB 3.2 Gen2 interface, feature-rich I/O with a pre-installed I/O shield, the latest wireless connection, and Ultra Durable technology, set to deliver an unmatched user experience.

“We are seeing increasing user demands for flexible systems that perform well in a multitude of tasks from gaming to content creation more than ever before,” said Chris Kilburn, corporate vice president and general manager, client component business unit, AMD. “AMD is excited to bring the power of 3rd Gen AMD Ryzen⑩ desktop processors and cutting edge PCIe㈢ 4.0 support to the mainstream users with our latest AMD B550 chipsets. With overwhelming platform support from our partners at Gigabyte, AMD is confident these new B550 platforms will provide flexibility and power never seen before on a mainstream platform.”

GIGABYTE B550 AORUS motherboards provide various power designs to fulfill different budgets and system configuration. Users can choose 10+3 phases, 12+2 phases DrMOS all digital PWM design, or go straight to the flagship model, B550 AORUS MASTER, to experience a maximum of 1120 Amps solid power supply from Direct 16 phases digital power design with each phase of Powerstage capable of managing up to 70A. As for those Mini-ITX board fans, B550I AORUS PRO AX implements 6+2 phases of DrMOS digital power design at 90A per phase, maximizing the overclocking potential on the 3rd Gen AMD Ryzen™ desktop processors under different configuration while balancing the power efficiency and durability.

Besides the variety of power supply design, GIGABYTE B550 AORUS motherboards also put effort into advanced thermal design of the power supply area. Beyond a multi-cut heatsink design, B550 AORUS PRO and higher motherboards come equipped with Fins-Array Heatsinks with Direct Touch Heatpipe for the strongest VRM cooling, providing coolness and stability to users while overclocking. With optimized heat dissipation of thermal baseplate and I/O, audio armor, B550 AORUS MASTER accomplishes a fusion of stylish thermal design and remarkable performance.

GIGABYTE B550 motherboards adopt a PCIe® 4.0 M.2 design, and users can experience lightning-fast read/write and data transfer speed of PCIe® 4.0 SSD through top-of-the line components with 3rd Gen AMD Ryzen™ desktop processors. GIGABYTE B550 AORUS motherboards all implement a M.2 thermal guard design to ensure that the M.2 SSD is adequately cooled under high-speed operation. Moreover, the B550 AORUS MASTER integrates three PCIe® 4.0 x4 M.2 slots layout directly from the processor which allows users to allocate the bandwidth between PCIe® and M.2 slots accordingly, even to build a NVMe M.2 SSD RAID 0 array which can achieve up to 12700MB/s in write speed, bringing the performance of PCIe® 4.0 VGA cards and SSDs into full play. 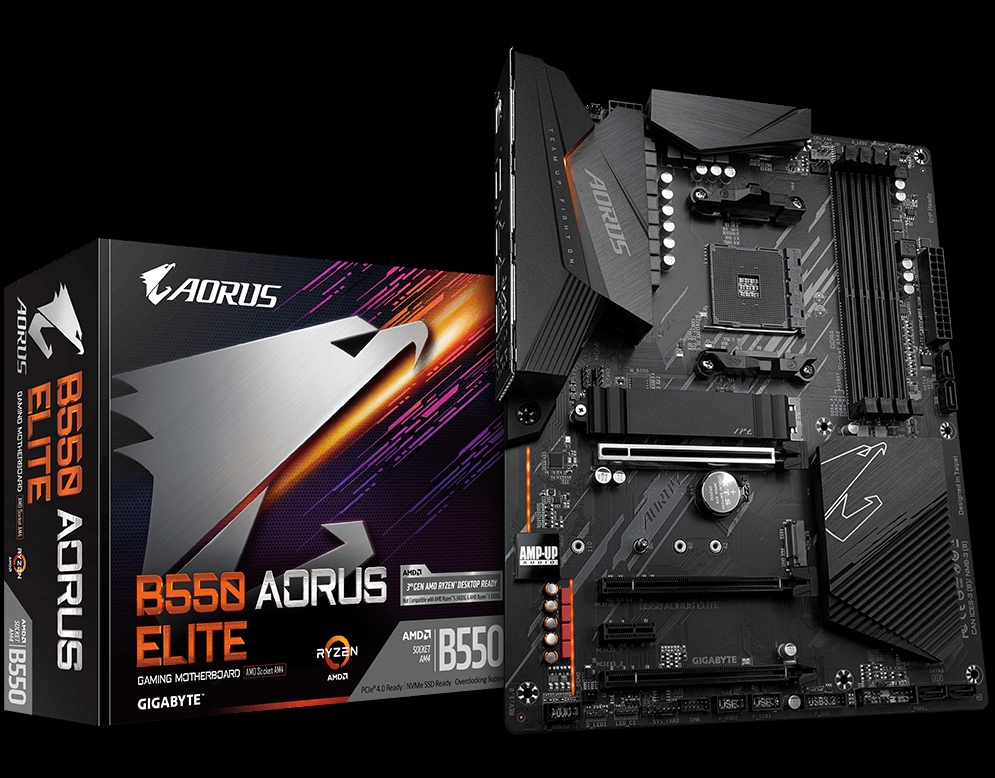 GIGABYTE B550 series motherboards come with the newest version of Q-Flash Plus Technology. Users can easily update BIOS without even installing a processor, memory, graphics cards, or booting up the PC so they can flash the BIOS without the concerns of not being able to boot up the system due to compatibility issues. GIGABYTE B550 series motherboards use an upgraded BIOS interface, providing users with a more intuitive user interface so they can easily fine tune their settings to upgrade their performance and overclocking.