Mini-ITX boards are among the most difficult to produce. Their diminutive 6.7” x 6.7” dimensions leave little real estate for slots and ports, let alone the extra features that make ROG unique. We’re not willing to compromise your experience for a compact footprint, so it takes some time and creativity to make everything fit. But it’s worth the effort, because our new Strix X370-I Gaming and Strix B350-I Gaming motherboards for Socket AM4 raise the bar for small-form-factor Ryzen builds. They match the cutting-edge features of their full-sized siblings, including liquid-ready cooling and addressable RGB lighting, and they combine an M.2 SSD heatsink and amped-up audio on an innovative riser card.

Optimized overclocking on liquid or air

Ryzen CPUs are physically much larger than the Intel alternatives, adding another layer to an already challenging proposition. The extra area is well-spent, though. With up to eight Zen-based CPU cores primed for heavy multitasking and multithreaded workloads, Ryzen offers exceptional performance and value for game streamers, content creators, and power users who want to do more with their PCs.

Our exclusive 5-Way Optimization technology simplifies the overclocking process for beginners and experts. This intelligent auto-tuner automatically overclocks the CPU and configures the cooling based on the individual characteristics of components in your build. First-timers can overclock easily with a single click, while veterans can quickly find a stable baseline before moving to more aggressive manual tuning. And both benefit from 5-Way’s ability to test connected fans and calibrate their response curves accordingly.

There are three fan headers onboard, one of which is configured out of the box for liquid pumps and all-in-one coolers. All the headers adapt automatically to three-pin DC or four-pin PWM devices. Instead of being bound to a single temperature sensor, each header can control fan speeds based on input from a group of multiple sensors. Along with the ability to detect GPU temperatures in select graphics cards, this capability ensures efficient cooling for a wide range of workloads, including gaming and other graphics-heavy work.

Audio and storage that think outside the form factor

The Republic of Gamers has a history of working around Mini-ITX limitations by building up with additional circuit boards. Our Maximus Impact series made room for upgraded audio with a dedicated riser, and the Strix X370-I and B350-I Gaming go one step further with an M.2 Audio Combo card that contains both SupremeFX sound and M.2 storage. This small PCB is sandwiched between isolated heatsinks for an M.2 drive and the platform chipset, ensuring effective cooling without taking up too much space. 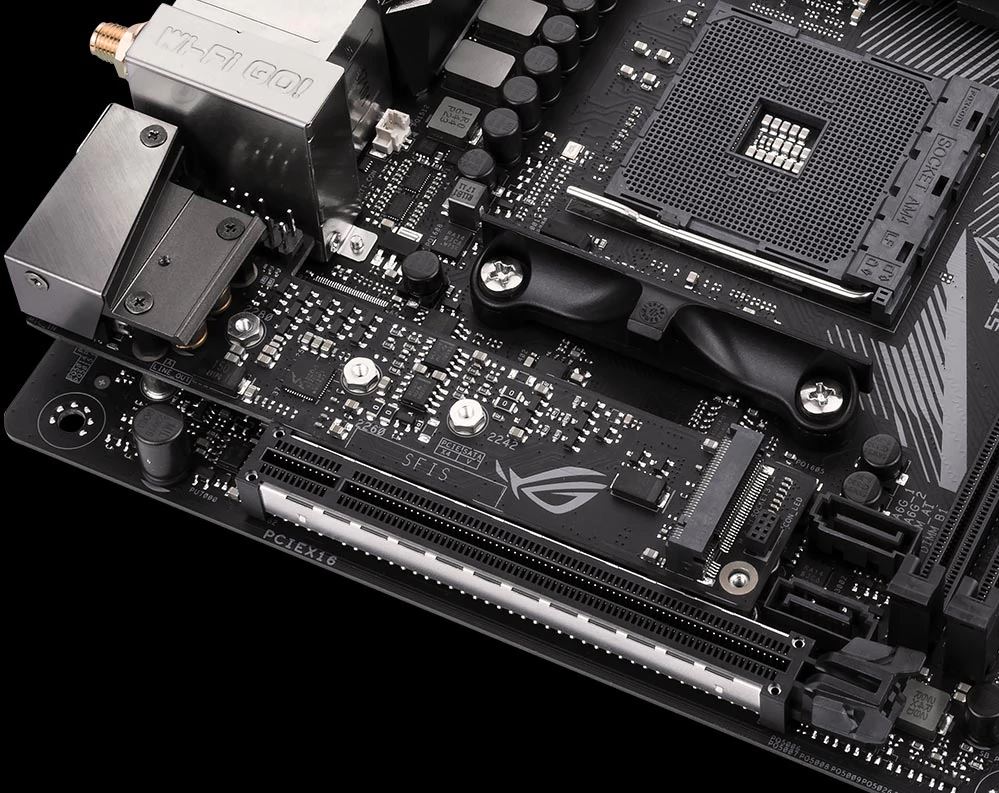 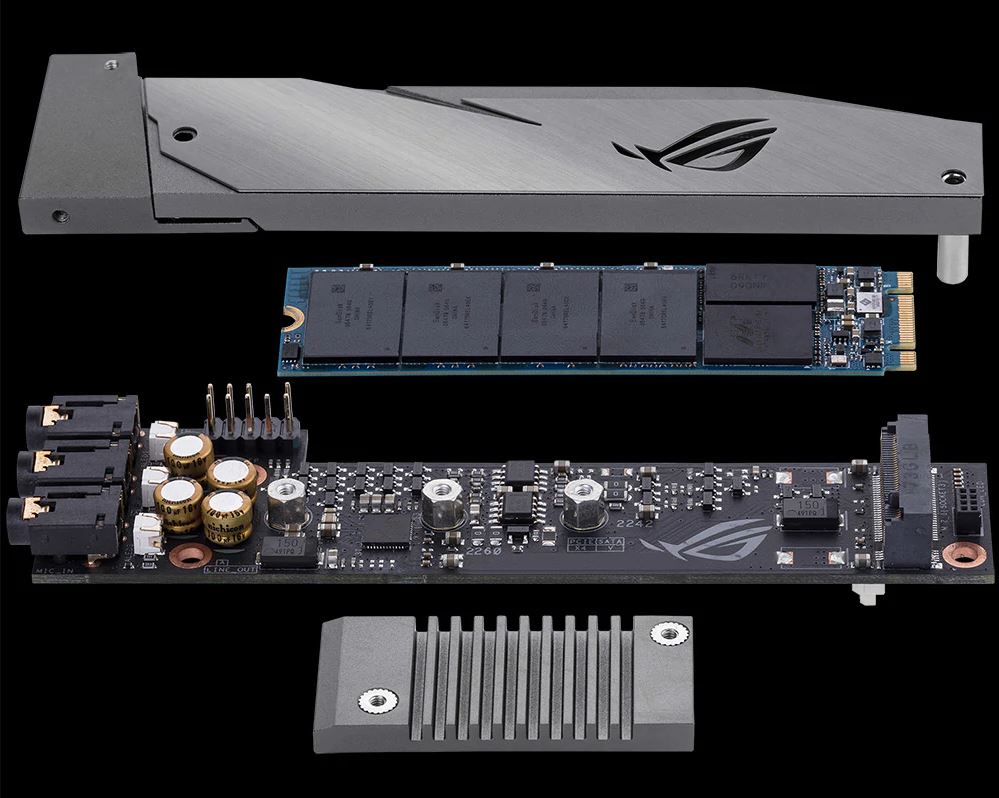 M.2 SSDs can throttle performance under sustained workloads that generate too much heat, and smaller Mini-ITX chassis present an especially toasty thermal environment. To help maintain performance when you need it most, the combo card reduces SSD temperatures with a custom heatsink. The M.2 slot supports the fastest NVMe drives with four lanes of Gen3 bandwidth directly from the CPU. It’s joined by a secondary M.2 slot on the back side of the motherboard, allowing you to run two SSDs without any cable clutter.

The SupremeFX audio is linked to a dedicated chipset interface, so it doesn’t share bandwidth with the primary M.2 slot. Its shielded S1220A codec routes audio output through headphone amplification capable of detecting and adjusting for the impedance of your headset. All of the audio circuitry is elevated off the motherboard, which helps isolate it from interference and improve overall fidelity. This is especially important for Mini-ITX motherboards that lack expansion capacity for a separate sound card.

Next-level lighting for your entire machine

Backlighting makes it easy to differentiate between the audio ports in the shadows behind your PC, but that’s just the tip of the iceberg for onboard illumination. The M.2 heatsink is backed by four LEDs, bringing color cycling and a range of other effects to the central ROG logo. A second lighting zone runs RGB LEDs under the right side of the motherboard to create a glowing edge that looks especially slick with linear effects. 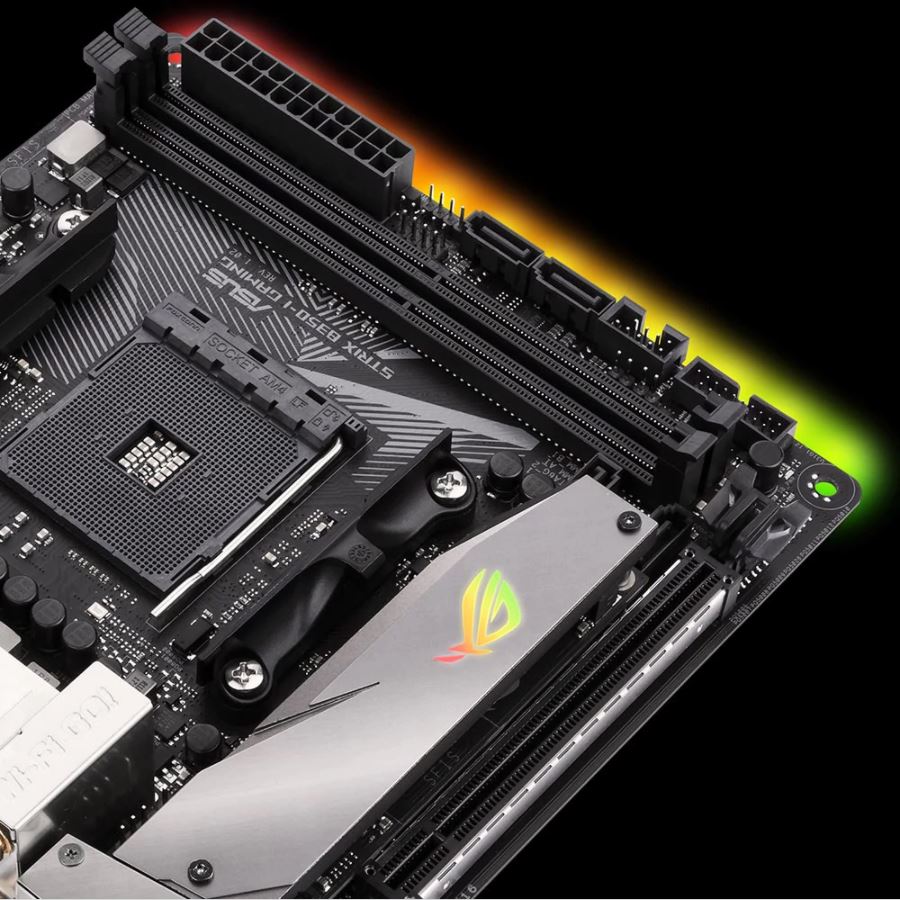 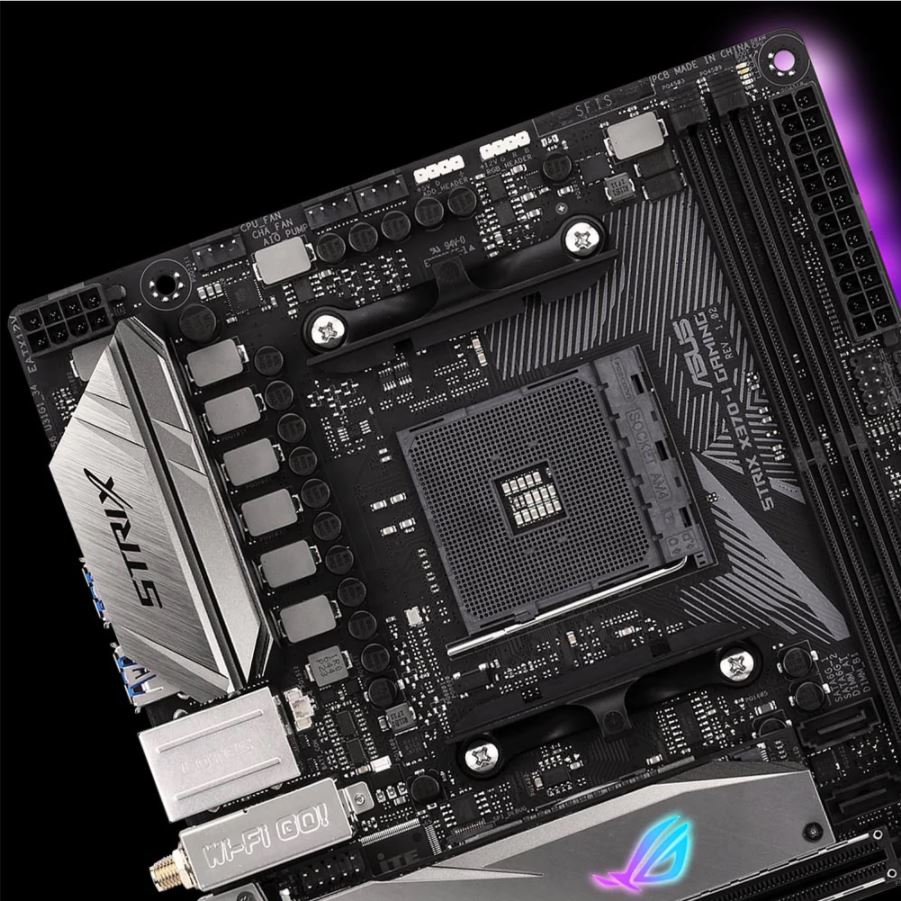 While onboard LEDs highlight the motherboard, headers support LED strips that extend illumination across your entire system. The Strix X370-I and B350-I Gaming both have an RGB strip header that lets you connect up to two meters of lighting—more than enough for Mini-ITX rigs. They also feature another header for addressable RGB devices that offer individual control over each LED. Addressable lighting opens up exciting possibilities for new functional and cosmetic effects, and we’re working with partners to integrate them into strips, fans, chassis, and other hardware.

With Aura Sync, the RGB zones and headers can synchronize colors and effects with compatible hardware. Between the ecosystem of Aura Sync components and peripherals from ROG and ASUS, plus other parts from our partners, it’s easy to coordinate a complete system. All the lighting is managed by our intuitive Aura utility, and our expanding Aura SDK opens up control to developers who want to use their own software.

Fully equipped in a fraction of the footprint

A single graphics card is all that’s needed for high-end gaming and VR machines, but GPU coolers are increasingly heavy, which puts additional strain on the PCI Express slot. Our SafeSlot reinforcements guard against damage from the bumps and rough handling that can occur when transporting systems to LANs and shipping them to customers. The PCIe x16 slot is secured to the circuit board with extra solder points, and its walls are reinforced with metal bracing.

With four SATA ports, there’s plenty of capacity for hard drives and additional SSDs. Around back, you get dual USB 3.1 Gen 2 ports with 10Gbps of bandwidth for fast external storage. They’re paired with four Gen1 USB ports linked directly to the CPU, along with an internal header for two more up front. We also include an internal USB 2.0 header for front-panel ports on older chassis and all-in-one coolers with additional functionality. Without display outputs, the boards are designed exclusively for gaming rigs with discrete graphics cards, which is basically all of them.

All but identical twins, the ROG Strix X370-I and B350-I Gaming set the standard for Mini-ITX AM4 motherboards. They’ll be available starting late-October in the United States with pricing to be released in the coming weeks. Please check with your local ASUS ROG representative for details on availability in other regions.